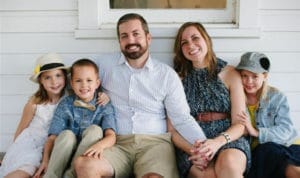 “Over the next 14 years, we would do the dance that I described (previously). Bobby continued to share staggered disclosures with me of his acting out, adding more pieces of the bigger picture of what his addiction entailed, but for years we had no idea this was actually an addiction. I began to try to hold him accountable and then for periods of time I just ignored the problem. Somewhere in the process, I began to believe various lies.

One was that this was just a normal guy struggle and he would never really be able to overcome it, so we would just have to figure out a way to manage it the best we could. And two, if I was being a good Christian wife, I just had to deal with it. There were periods of time that I tried to be kind and gracious and periods of time where I exploded with anger and said things that caused him to feel more shame. These were all of my attempts to control or manage his acting out behavior. One of the most disheartening things for us was the lack of understanding of sex addiction in the Christian community. We did not keep his struggle a secret. We spoke with friends, older couples, pastors in our church, professors in our Christian college and there wasn’t a single person who could identify this as a sex addiction or point us in the direction of good help. So we continued trying to do the best we could but really having no idea how unhealthy all of this was.”