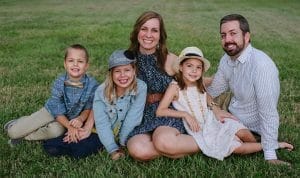 My name is Kyla, and my husband Bobby completed the HopeQuest Trek program this past summer. We have been married for 13 years, together for 16, and we have 3 kiddos. Bobby and I were both believers prior to finishing high school and started dating just after I graduated high school. We have served together in missions, youth ministry, and leading worship. During this time, we also had tremendous struggles in our marriage.

I first began to learn about Bobby’s sex addiction when we had only been dating a few months. Bobby confessed to a small piece of the bigger picture of what he was wrestling with. He shared that he struggled with thinking about and being attracted to other women. It was truly devastating to even hear a small part of what he was struggling with. I felt betrayed, not good enough, confused, overwhelmed, lonely and in pain. I certainly didn’t know how to move forward from there.

During that first year, while we had a long distance relationship because I was away in college, we would spend hours on the phone (at my request) so I could ask hundreds of questions and attempt to share the pain I was feeling over his betrayal. This is where a lot of my codependency and hypervigilance kicked into high gear and continued for years until we were in early recovery. I asked all of the detailed questions about who he was attracted to and if he was hanging around those people. I had no idea, especially in a Christian marriage, that I could have and needed a safety plan and boundaries; instead, I tried to monitor and control everything. That first year after he shared was a mess and it didn’t get better from there.